If you missed us, send an email to make a research appointment or to ask for help:

Ushering in a period of automated printing thanks to machine works, the movement away from a press that necessitated composing a bed of type and manually pulling the press over the bed coincided with the Industrial Revolution. The transition to machine press began with the adoption of the double cylinder press by the London Times. The paper's owner, John Walter, took a chance on Friedrich Koenig's new double cylinder press and printed the November 29, 1814 issue of the paper with new printer. This new press was exponentially more efficient than the handpresses they had been using and the trick was the rotary which kept a continuous flow of motion.

From that point forward, there were a number of new innovations that almost completely automated printing: stereotypes by Edward Cowper, the rotary press by Richard M. Hoe, and finally William Bullock's steam-powered rotary press which was "fed by the rolls of paper now being produced in bulk... with the web of paper led around a series of cylinders carrying curved stereotype plates and out through a mechanism that sliced the paper--printed on both sides--into individual sheets" (Keith Houston, The Book, p. 135). All these innovations were closely tied to the newspaper business, and the need to quickly print a lot of papers on a daily basis fueled the inventors. 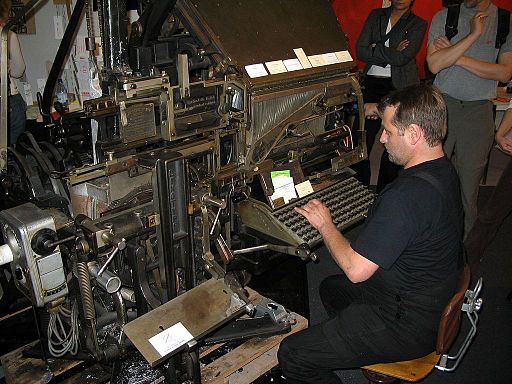 However, unseating the handpress only picked up steam (no pun intended) with the Linotype machine, invented by Ottmar Mergenthaler and perfected by about the year 1890, which put "Church's principle" into action: automatically casting type and composing along with automatically printing. The machine's ability to cast all needed type for a job eliminated many problems, including running out of type, messing up a forme of type, and the thankless task of resorting the type at the end of the job. After demonstrating the new machine at the offices of the Chicago Tribune, the paper's owner said to Mergenthaler, "You have done it, Ottmar, you have done it, you have produced a line o' type," and the name stuck, bestowing upon the revolutionary machine the name Linotype (Jennett, Pioneers in Printing, pgs. 168-169). The image here is a demonstration of a Linotype machine at the Frankfurt Bookfair in 2005 from Wikimedia Commons.

Around the same time, Tolbert Lanston invented the Monotype machine which cast type on demand like the Linotype, and employed a person or people at a keyboard, but instead the keyboard operator triggered the punching of spools of paper into codes for words, and those punched paper spools were then fed to the printing module. The machine was fast and has been hailed as the predecessor of the modern computer. In the end, there was room for both machines in the market and together they revolutionized the technology of printing.

The following items are available to consult in the Archives & Special Collections reading room on the 3rd floor of the library. Email SpecialCollections@scu.edu to arrange an appointment.