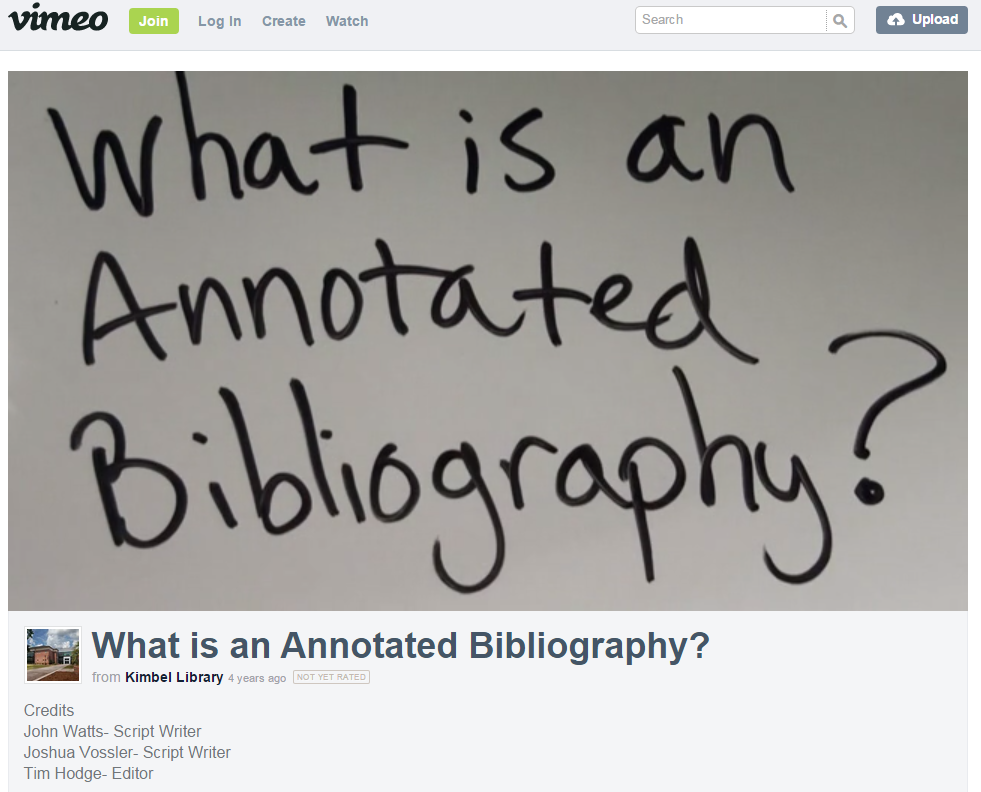 What is an Annotated Bibliography?

What is an annotated bibliography?

A standard bibliography details the citation information of the consulted sources:

The primary function of bibliographic citations is to assist the reader in finding the sources used in the writing of a work.

To these basic citations, the annotated bibliography adds descriptive and evaluative comments (i.e., an annotation), assessing the nature and value of the cited works. The addition of commentary provides the future reader or researcher essential critical information and a foundation for further research.

What each annotated bibliographic entry should include

Annotations begin on the line following the citation data and should be composed with complete sentences. Each annotation should include most, if not all, of the following:

Questions you should be able to answer

The following are some questions to help you write the descriptive part of the annotation:

Now some questions to help you write the evaluative part of the annotation:

Gender portrayals in 2,209 network television commercials from 1990 were content analyzed.  To compare differences between three day parts, the sample was chosen from three time periods: daytime, evening prime time, and weekend afternoon sportscasts.  The gender of the characters, their roles, the product advertised, setting, and gender of primary narrator were noted.  The results indicate large and consistent differences in the way men and women are portrayed in these three day parts, with almost all comparisons reaching significance at the .05 level.  Although ads in all day parts tended to portray men in stereotypical roles of authority and dominance, those on weekends tended to emphasize escape from home and family.  The findings of earlier studies that did not consider day part differences may now have to be reevaluated, for they may have either overestimated or underestimated certain types of gender differences.

This scholarly journal article provides an uncommon interpretation of the events of April-June, 1989, in  Beijing.  The authors are history professors at American universities with recent firsthand experience in China.  They base their article on research, personal observation, and the written and pictorial records of events.  Their stated goal is to create a framework in which to interpret the events that will place them within the context of Chinese political history and permit comparison with recent similar events in Eastern Europe.  The conclusion drawn is that the events of April-June, 1989, in Beijing were not related to Western participatory democracy but rather to traditional Chinese forms and ideas and are characterized as political theater.  As such, they are full of symbols and scripts with unique Chinese historical bases.

This site was created by CNN to commemorate the June, 1989, massacre of student protestors by the Chinese Army in Tiananmen Square.  It provides links to news stories about the controversial “Tiananmen papers”, a Who’s Who of Chinese government officials involved at the time, access to a few relevant news stories since 1989, and, most significantly, several videos available in different media formats, photos, and audios that constitute eyewitness accounts of the events at the time.