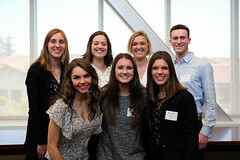 Abstract: The goal of CERVIS is to make a substantial, positive impact in the cervical cancer diagnostic space through the development of a minimally invasive, cost effective solution that enables women in low-resource settings to test for cervical cancer on a frugal and effective platform. In the developed world, there are a variety of options that can aid in early detection, including pap smears. However, due to the high cost and laboratory requirements that accompany this procedure, women in low-resource settings rarely have access to this preventative care or regular screenings for cervical cancer. Using new research about the changes in the vaginal microbiome, we aim to create a frugal, visual diagnostic screening tool for early stage cervical cancer as an alternative to the existing expensive, invasive, and clinic-dependent methods. Outcomes will be measured by partnering with a Kenyan NGO to collect data from several clinics.

The CERVIS team completed this project for a Senior Design/Engineering World Health program. Their research built upon the work of researchers from the previous year. The CERVIS team investigated, and ultimately adopted, an entirely new approach to the problem. They conducted extensive research in the PubMed database looking for information on the novel field of the vaginal microbiome. Professor Michele Parker wrote in her supporting letter that "these manuscripts were written for the medical community, and is typically a challenge for undergraduates to understand. Yet this team was resourceful, reaching out to physicians and faculty for help filling in the missing pieces." In addition, team members developed new protocols for growing specific bacteria species in the SCU microbiology lab and worked with a local company to develop their proposed solution to the problem. Their diligence was recognized as they were invited to present their research at the Yale University Global Health and Innovation Conference and a subsequent research article has been accepted for publication in a professional journal. Dr. Parker added that the "CERVIS team is one of the most analytical, creative and determined teams I've had the fortune of working with in my 14 years of teaching." 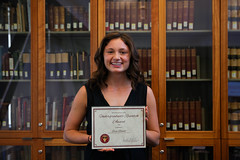 Abstract: Following a scholarly need to test compelling community level sociodemographic representations of environmental behaviors and outcomes, a sequential mixed method approach was used to evaluate the connections of human agency and systemic inequalities with carbon footprints. Statistical analyses of the 2016 SDG San Jose Dashboard data of city blocks and 2009 - 2013 ACS survey data were supplemented with interviews with eight climate action-oriented community engagement professionals in the South Bay. Boundary limiting socioeconomic conditions for systemic inequalities and human agency, dimensions of Gidden’s Structuration model, were specified. Partially supporting structural inequality theories, socioeconomic resources, primarily, and to a lesser extent dominant race concentration, were associated with larger carbon footprints, particularly when wealth was concentrated. Both human (time driven alone) and demographic (senior and mid-aged blocks) agencies were also in part at play in shrinking or even enlarging carbon footprints, in wealthier communities. These findings not only contributed to the literature on climate action, but also highlighted the need for targeted interventions in communities of different socioeconomic standing.

Erin adopted an interdisciplinary, multimodal approach to her Sociology capstone project. She obtained carbon emission data for 524 census blocks in San Jose via the Sustainable Development Goals project at Stanford. She then merged this data with 11 datasets from the American Community Survey (U.S. Census Bureau). Combining these different datasets was a month-long project in itself. In addition to the data, she conducted an extensive literature review to situate her research within a broader sociological context. Ms. Ronald did not stop there. She also interviewed eight professionals in climate mitigation throughout the Bay area. These interviews allowed her to ask both exploratory and critical questions to help her understand the many nuances in a complex issue. Professor Marilyn Fernandez, her supervisor for this project, noted that "her research on environmental issues is timely and makes a significant contribution to evidence-based programs to tackling social inequalities through sustainable development practice." Furthermore, "Ms. Ronald’s work is an excellent representation of the Sociology curriculum and the university’s mission to prepare students of competence, conscience, and compassion." Erin presented her research findings at the 44th Annual Sociology and Anthropology conference and published her results in the Silicon Valley Notebook.